skip to main | skip to sidebar

Now don't faint from getting two posts from me in one week (LOL).  On one of the lists I belong to, we have a challenge to do a large crazy quilt, close to 60 inches, with our slogan being C-Q in 2-0-1-2 -- the year it needs to be finished.  I decided my Fantasy Quilt blocks would work for this challenge and hopefully the challenge would spur me on to actually working on this project.

To that end, I commissioned my friend Janet to paint an alien for me.  I asked that he not be cartoonish and that he seem like a real person, like one of "my people" and I wanted him to hiding in the forest.  I think she did a fantastic job.  In this photograph (which doesn't show true color, since we have not had any sunshine for weeks on end) you cannot see the pale green highlights and shading that makes him so life like. 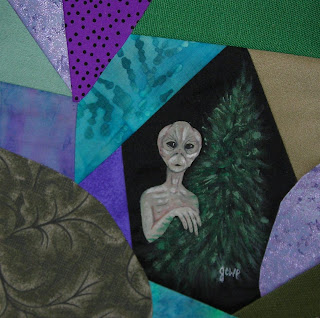 I very highly recommend Janet's work.  My piece was painted on black silk.  The painting does not change the hand of the fabric at all.  I am also lucky enough to have a second piece from Janet, a beautiful owl.
If you look at the upper left hand corner of the block, this is my first attempt at a Judith Baker Montano fan swirl.  Not too bad for a first try.  I have both the DVD and her newest book Montano Montage.  The directions that helped me the most were in the book.  I later tried to do one of her pieced mitered angle blocks and completely blew it!  I guess I need more practice with them.
Have a good weekend.  We're set for more snow (continued grey skies) starting tonight and going through most of the weekend.  That means I should be able to make more progress on these blocks.
Posted by Maddie Can Fly at 1:02 PM

Oh Lesa, he looks great on there! You've made him such a lovely block home he never wants to return to his home planet! Keep posting your progress. More snow this weekend? The only good thing about that is you almost have to stay in and stitch.

What a great project! Janet's painting is fantastic! Love your colors and movement. Will be watching!

I almost fainted...LOL, not from you blogging twice but from the alien!!!! My compliments for Janets
painting and your lovely block.